It seems like each month there’s a new pasta recipe having a viral moment on TikTok. We all remember the TikTok baked feta pasta that happened at the beginning of the year right? Well now we have the “honeycomb pasta”…

What is Honeycomb Pasta?

Don’t worry, it doesn’t have any actual honey in it. It’s called a honeycomb pasta because the final outcome resembles a honeycomb. This is due to the pasta (usually rigatoni) standing up vertically in a pan, then being baked with sauce/ toppings, which then causes each rigatoni to soften and attach to one another (thus forming a “honeycomb”.)

Isn’t that Just a Baked Ziti?

Yes, yes it is. All of the ingredients are the same as a baked ziti, it’s just a more impressive/cooler-looking version. And to be honest, the concept of standing the rigatoni upright has been around for awhile. I don’t know where it originated from, but I’ve seen several recipes doing this (referring to them as ‘Rigatoni Pies’) for some time now. But of course, ‘rigatoni pie’ doesn’t sound as cool as ‘honeycomb pasta’.

What Do You Need to Make the Honeycomb Pasta?

If for some reason you can’t decide what you want to experiment with first, we’ve rounded up the best honeycomb pasta recipes that we’ve come across.

Anna Rothfuss is the one behind this recipe going viral on TikTok. She recently shared her version (comprised of string cheese being placed inside the rigatoni, along with tomato sauce, ground beef, and more cheese on top), which had very mixed reviews.

Some claimed it was a crime against Italian food, while others praised her for coming up with an inexpensive and creative way to make a baked ziti. While it definitely breaks from the traditional version, you have to admit that it’s pretty darn creative. And while some still aren’t on board with this recipe, I’ve never come across a dish that had pasta, sauce, and cheese, that I didn’t like 😉

Get the full recipe and directions from Anna Rothfuss

This is probably the easiest and most straightforward recipe in the bunch, and all you need are 3 ingredients: rigatoni, marinara sauce, and shredded mozzarella. And if you thought was already easy enough, she recommends using a store-bought marinara sauce vs making it from scratch. With this version coming in at under an hour to make, this recipe is perfect for an easy weeknight dinner.

Get the full recipe and directions from Cheese Knees

This recipe had me at ‘pork and creamy’. To say the sauce is decadent and luxurious would be an understatement. It uses guanciale (cured pig cheek) bathed in a garlicky and flavorful cream sauce. And then to top it all off? Gouda! How did the author know that guanciale and gouda are my 2 favorite things!

Note: If guanciale is hard to get ahold of, you can use pancetta or a high-quality bacon .

Get the full recipe and directions from Lady and Pups

I know we’re just barely in spring, but pasta dishes are year-round so we want to share an autumn version of this recipe as well. If you love bundling up in the colder months and eating pasta, then this recipe is for you. It uses a butternut squash-infused ricotta mixed with onion, sage, garlic, and whole cubes of roasted butternut squash, that’s then piped into the rigatoni. And if that doesn’t sound amazing enough, the accompanying sauce is mascarpone with nutmeg and parmesan – delicious!

Get the full recipe and directions from BBC Food

If a baked rigatoni wasn’t already decadent enough, this recipe uses 3 different cheeses. Yeah, that’s right, THREE! This recipe is similar to the others in that it uses a jarred marinara sauce, but it also uses ricotta parmesan, and mozzarella for an ultra cheesy experience. While this recipe also calls for ground pork, I recommend this version of the recipe for vegetarians, but obviously removing the pork.

Get the full recipe and directions from One Little Project

If there are any basil and pesto fans, then this is the recipe for you. The pesto is blended with ricotta, then piped into each rigatoni tube. The entire pie is then covered with a tomato basil pasta sauce for added flavor dimension. Lastly, everything is topped with shredded mozzarella and basil ribbons for a truly amazing flavor bomb.

Get the full recipe and directions from Cooking Mamas

I love kale and try to put it into as many recipes as possible. So I love the idea of this one, which is putting the kale into a creamy garlic sauce and pouring the sauce all over the pasta. The creamy garlic sauce works so well as the flavor profile, while the egg acts as a binder to hold the rigatoni pie together. Top it with some mozzarella and kale, and you’re good to go!

Get the full recipe and directions from Taste.com 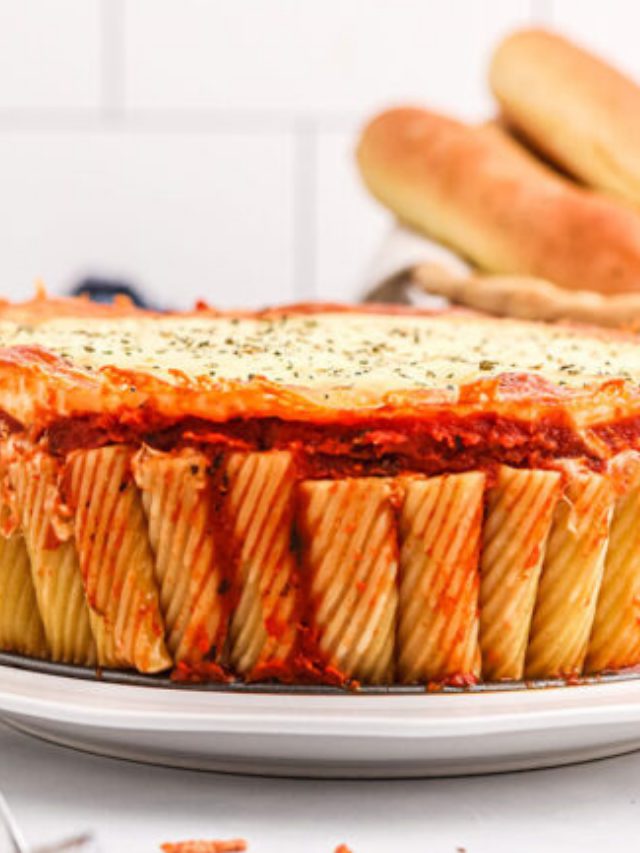 There are so many different flavor combinations you can do with this concept, so really any sauce and cheese will work. We recommend playing around and turning your favorite pasta dishes into a honeycomb version. Let us know if you try and of these recipes, and if you liked them!